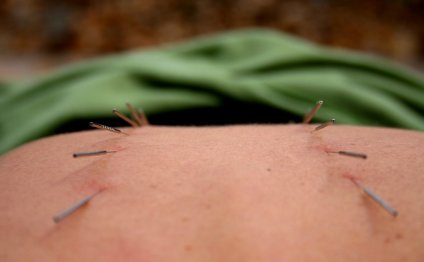 Here are current thoughts from the National Institutes of Health on the manner by which acupuncture might produce beneficial health results.

Many studies in animals and humans have demonstrated that acupuncture can cause multiple biological responses. These responses can occur locally, i.e., at or close to the site of application, or at a distance, mediated mainly by sensory neurons to many structures within the central nervous system. This can lead to activation of pathways affecting various physiological systems in the brain as well as in the periphery. A focus of attention has been the role of endogenous opioids in acupuncture analgesia. Considerable evidence supports the claim that opioid peptides are released during acupuncture and that the analgesic effects of acupuncture are at least partially explained by their actions. That opioid antagonists such as naloxone reverse the analgesic effects of acupuncture further strengthens this hypothesis. Stimulation by acupuncture may also activate the hypothalamus and the, resulting in a broad spectrum of systemic effects. Alteration in the secretion of neurotransmitters and neurohormones and changes in the regulation of blood flow, both centrally and peripherally, have been documented. There is also evidence that there are alterations in immune functions produced by acupuncture. Which of these and other physiological changes mediate clinical effects is at present unclear.

Despite considerable efforts to understand the anatomy and physiology of the "acupuncture points, " the definition and characterization of these points remains controversial. Even more elusive is the scientific basis of some of the key traditional Eastern medical concepts such as the circulation of Qi, the meridian system, and other related theories, which are difficult to reconcile with contemporary biomedical information but continue to play an important role in the evaluation of patients and the formulation of treatment in acupuncture.

It should be noted also that for any therapeutic intervention, including acupuncture, the so-called "non-specific" effects account for a substantial proportion of its effectiveness, and thus should not be casually discounted. Many factors may profoundly determine therapeutic outcome including the quality of the relationship between the clinician and the patient, the degree of trust, the expectations of the patient, the compatibility of the backgrounds and belief systems of the clinician and the patient, as well as a myriad of factors that together define the therapeutic milieu.

Although much remains unknown regarding the mechanism(s) that might mediate the therapeutic effect of acupuncture, it is encouraging that a number of significant acupuncture-related biological changes can be identified and carefully delineated.

Further research in this direction not only is important for elucidating the phenomena associated with acupuncture, but also has the potential for exploring new pathways in human physiology not previously examined in a systematic manner.

Acupuncture, Can This Affect Fertility?

Can Acupuncture Help Me? - www.acupunctureincostamesa.com